Back on the 10th of May I was at the Chicago Portage and counted 52 species. On the 17th of May, visiting with two friends, we counted 35 species. This afternoon, after gale winds in the morning and some rain, I went over to see what was up and counted 29 species. 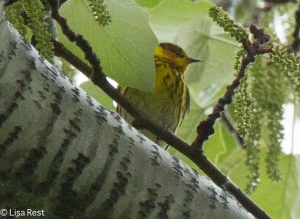 Three weeks ago was the height of spring migration, and already by last weekend it was slowing down.

Last week the goose family had dwindled to four goslings and today I was told by a woman I talked to on the trail that they were down to three. I did run into the geese today, but they were foraging in the grasses and I did not want to bother them, as they were pretty well hidden. So I am taking her word for it.

The Red-Eyed Vireos are still present and singing, so they probably breed here, but all the thrushes except for American Robin have left, and the sparrow species as well. There was quite an influx of Veerys this year, I don’t usually see them.

But as the last of the sparrows were getting ready to leave, the Green Herons were returning. I believe there are two although I have not yet seen them both on the same visit. I think they also hang out at Ottawa Trail Woods which is also where we went last weekend. I have included a few pictures here are from Ottawa Trail Woods, as it is basically part of the same ecosystem. 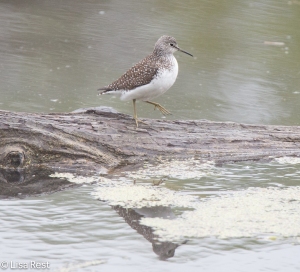 Spotted Sandpiper at the Chicago Portage, 5-10-15

On the 10th I saw both Spotted and Solitary Sandpipers, not on sandbars or mudflats but on dead wood in the water. The water levels were a bit lower though. I have not seen or heard any shorebirds since.

The Scarlet Tanager above basically flew down and sat right in front of me. I was so surprised I barely got his photograph.

Yellow-Rumped Warbler, Myrtle female, 5-10-15 – You cannot see the yellow rump but this is the first year I have noticed they also have yellow on the crown 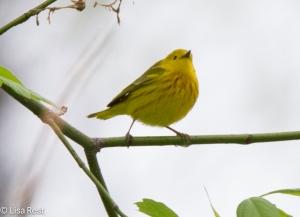 The only warblers willing to pose were the most common ones. The Yellow-Rumped Warblers are gone, but the Yellow Warblers stay for the summer. 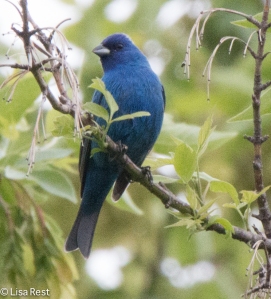 Indigo Buntings are everywhere. I have not seen the females yet but the Portage has at least four males singing on territory. I have also seen many Barn Swallows, Tree Swallows and Northern Rough-Winged Swallows. Eastern Kingbird, Portage 5-25-15 – There were two today, sallying for prey over the slough 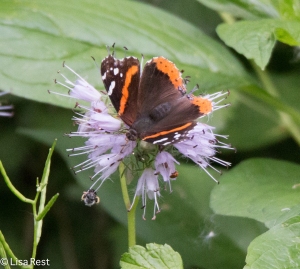 Red Admiral on a wildflower I have yet to identify – I should know it! But I have never seen it at the Portage before. Is this some kind of monarda?

I included the butterfly picture because to me it signals the end of spring migration and the beginning of summer, when butterflies and dragonflies vie for my attention. 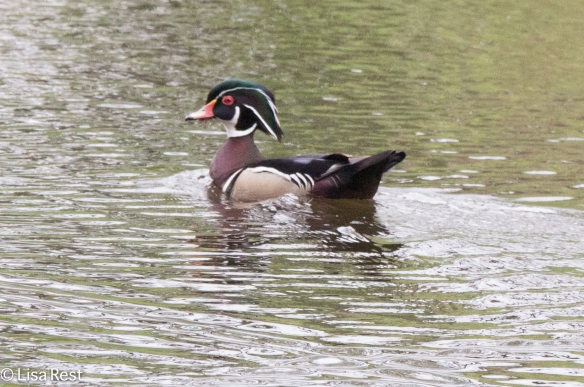 I didn’t see any ducks today at the Portage. In years past there have always been a breeding pair of Wood Ducks, so I hope they are busy nesting.

I hope to be back soon with a short report on birds in Berwyn. I just saw a Ruby-Throated Hummingbird at my hummingbird feeders this evening, which gave me the perfect reason  to clean and refill the feeders. While I was out in my yard my neighbor appeared and told me he saw the hummer yesterday! Maybe I’ll get a picture this year before September.

I went to La Bagh Woods for the first time this past weekend after hearing it identified as a birding “hot spot,” particularly during spring migration, for years. This has been a weird warbler migration year, so I thought I might as well check it out. The primary regional hotspot, Montrose Harbor, has been predictably pretty good all season, particularly during the week while I’m at work, although the numbers have been low even for Montrose.

After coming downtown all week I am not in a hurry to frequent the lakefront. It’s generally crowded, which is not my favorite way to see birds. How can I be sure a bird is looking at me if there are ten other people with binoculars/cameras trained on it? This is also the place where those who can bring out their 800mm lenses and huge tripods and I feel silly, almost apologetic, schlepping around a 400mm lens.

I started out at La Bagh seeing a Wilson’s Warbler. I have always found Wilson’s to be friendly when they’re down about eye level, and this one was no exception. It was pretty shady though.

Wilson was not far from the landmark graffiti, which came in handy later when I was trying to find my way back to my car. 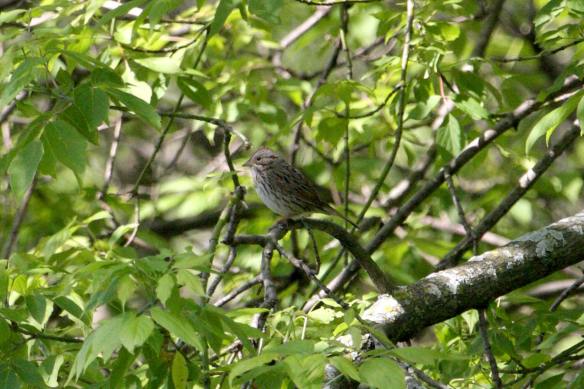 No surprise that I found a Lincoln’s Sparrow, I guess. There have been a lot of them this year. And here’s a goldfinch. 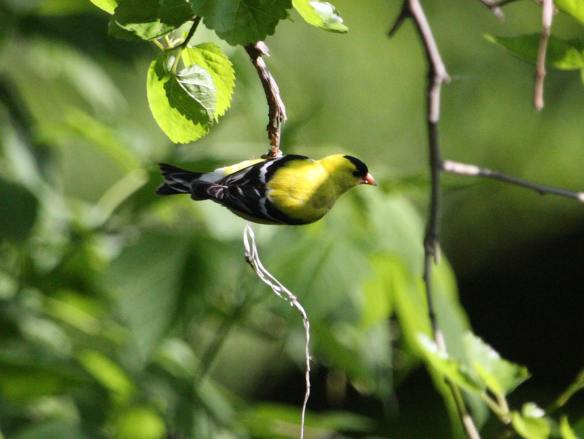 There’s an old railroad bed running alongside the preserve. The tracks have been removed, leaving gravel to walk on, out in the open, which is where I saw a Golden-Winged Warbler.

I wasn’t close enough to get a sharp picture but I’m excited anyway, this is the first Golden-Winged I’ve seen in years. Even though the warblers have been few and far between, they have been rewarding nonetheless.

Other forest creatures were perhaps better models. I’m sorry I didn’t manage to capture the two coyotes I saw early, but there were several deer, 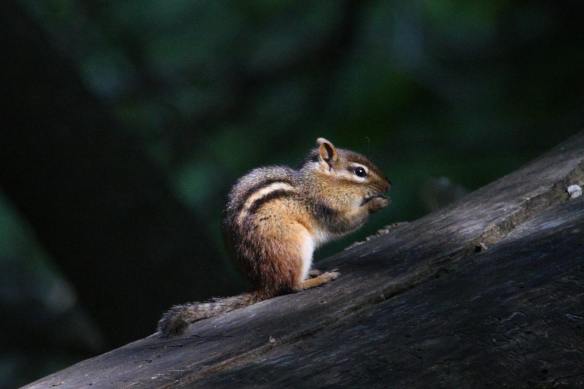 and a squirrel looking strange carrying its young in its mouth up the tree.

There were a few thrushes. I managed to capture a Veery with its back toward me,

What else? A Blackpoll Warbler with his back toward me. 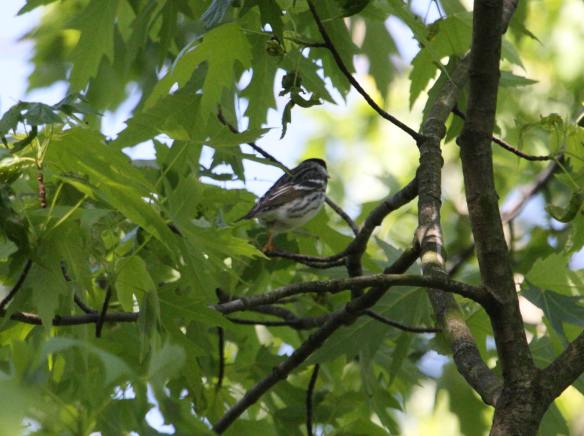 A preening Baltimore Oriole with his back toward me too. 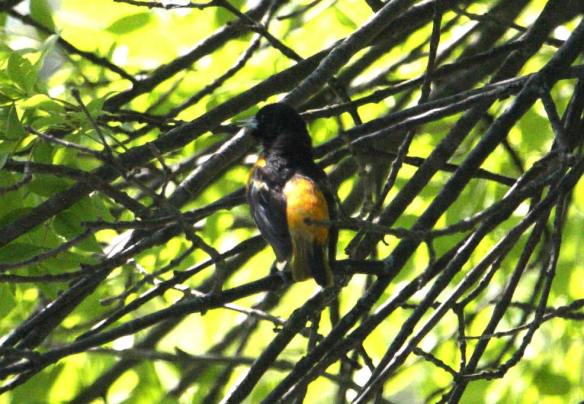 I could call it La Back, instead of La Bagh.