I have been struggling to come up with a narrative for this post of pictures from the remainder of this day. Yesterday I would have finally managed it except I got sick, however briefly, and needed to sleep. Now that I’m fully recovered, it’s time to plunge into more holiday festivities.

So maybe it’s best just to let the pictures speak for themselves so I can move on to the next chapter.

The Northern Gannets were never close, but they were always distinctive.

Happy Hanukah, Merry Christmas, Happy Solstice, whatever you are celebrating, and if I don’t get a chance before the 31st, Happy New Year…

Shorebirds are not confined to the shore. Indeed, any place where water accumulates and then recedes creates an instant migratory shorebird feeding ground. But the birds are often very far away from wherever you have stopped to observe them. Unless you are lucky enough to find a deserted beach where you can hide behind something, chances are you will be looking at shorebirds either on a remote sandbar or, inland, across quite a distance. 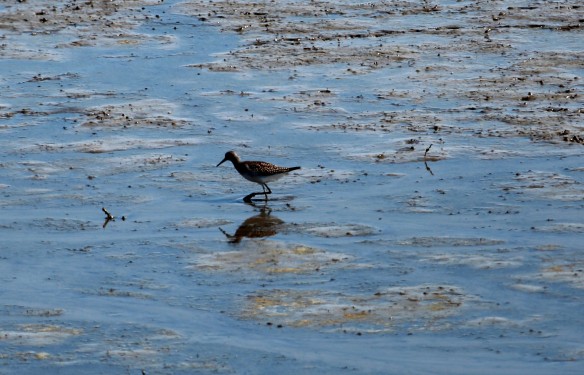 On Sunday morning, I joined a joint-sponsored Chicago Ornithological Society/Evanston North Shore Bird Club event led by the venerable local birder par excellence Walter Marcisz. The destination was the sludge ponds at the Calumet branch of the Greater Chicago Metropolitan Water Reclamation District. The field trip was prearranged months ago and required background checks of all participants, since this is government property, not a designated birding hotspot.There was a decent variety of birds, although nothing out of the ordinary except for three beautiful Black-Bellied Plovers. But due to the nature of the location, cameras were not allowed. So the two shorebird pictures you see here were taken last weekend at Chautauqua or Emiquon. At least I got a good picture of the Emiquon sign. 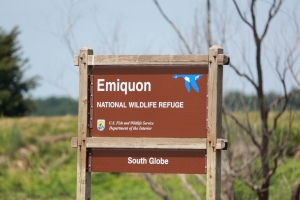 If I was ever unsure about Pectoral Sandpipers I have made up for it this year already; everywhere I have been there have been several.

There were other birds too last weekend, like this Northern Rough-Winged Swallow.

And an Indigo Bunting who would have qualified for my previous post about blending in. 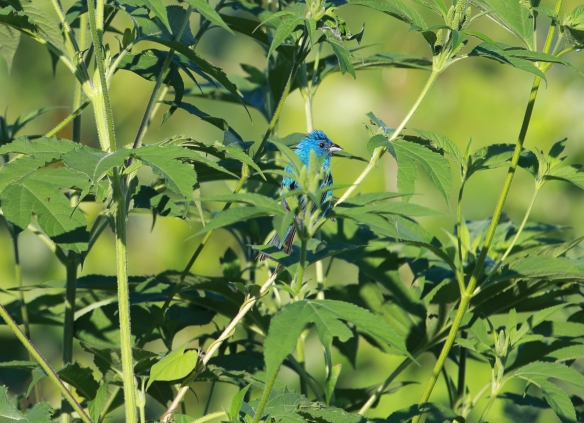 In any event, the sludge pond trip left me far south enough to cut west over to McGinnis Slough. Even though it was by then mid-day, it seemed prudent to check it out. The Swamp Rose Mallow is in full bloom now. 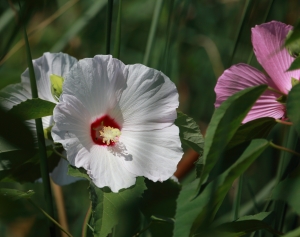 Periodically, flocks of blackbirds would rise up from the marsh where they were no doubt feeding alongside shorebirds I could not see. There were also huge flocks of Chimney Swifts but I was at a loss to photograph them adequately. 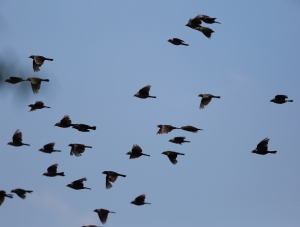 Further south I was delighted to find the Sandhill Cranes, possibly the same birds from a couple weeks ago. There were again three, but only two fit in one picture frame. All that brown stuff on the ground is dried up pond lilies, which completely camouflaged smaller birds feeding in it. 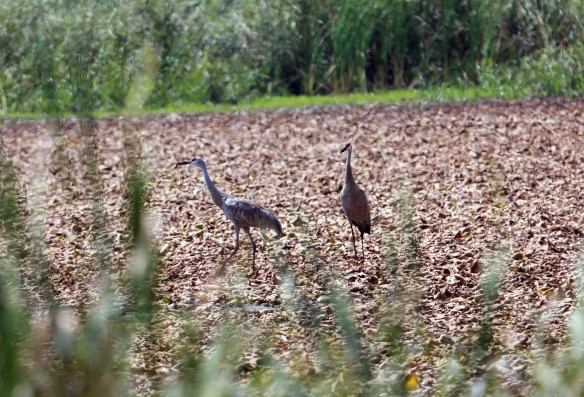 So our weather has changed from cool, cloudy and rainy to hot and dry in little more than a week. Much of my time for blogging has instead been spent watering my front yard. More about that eventually (assuming watering and praying for rain works).