A combination of unpredictable weekend weather and outright curiosity caused me to spend some time in the last few weeks walking around the block, so to speak, to see what birds were present. Other factors also pushed me over the edge: reading John Marzluff’s Welcome to Subirdia (still reading it but like three or four other books I’ve started who knows when I’ll finish it), hearing Red-Eyed Vireos singing on my way to work, seeing Rose-Breasted Grosbeaks at my feeder, and not wanting particularly to get up in the middle of the night so I could arrive somewhere farther by daybreak.

Of course the Robins have been on territory for quite a while, and they pretty much act like they own the place, but they’re still fun to watch.

One evening I got home from work and saw the two Wood Ducks in the picture above when they landed on top of a chimney across the street. They looked as surprised to be there as I was to see them. 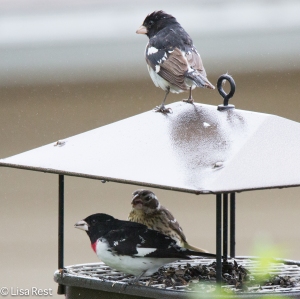 Rose-Breasted Grosbeaks on the feeder 5-10-15

The three Rose-Breasted Grosbeaks sampling sunflower seeds above appeared to be an adult male, a female and a somewhat immature male (the guy sitting on top of the feeder in the first picture). Maybe the pair were showing junior his first trip north.

A week later there was still a male in the neighborhood. Rose-Breasted Grosbeaks breed in this area, but I think they still prefer the forest preserves.

On May 16 I found two Red-Eyed Vireos but they wouldn’t pose for pictures. However I did manage to engage the cooperative, hungry female Black-and-White Warbler below. She was just down the street from my house. 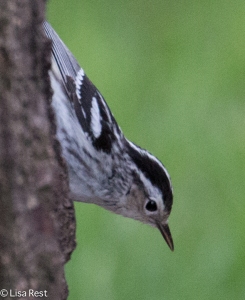 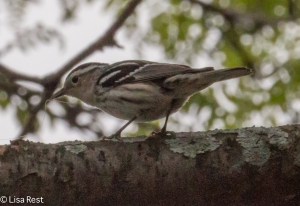 Also not far away was the Yellow Warbler below. These are not unusual species but to see them not far from the house is unusual for me, since it never occurred to me that if I was just patient and looked a little harder, I could likely find some warblers in the neighborhood. 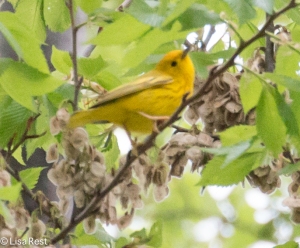 Blue Jays tend to be heard and rarely seen, but I did get good looks at this one. He probably thought I was a curious sight, walking around with binoculars and a camera. 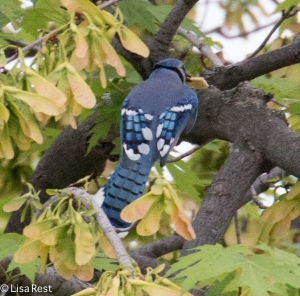 Maybe most surprising was seeing a Hermit Thrush dash out from underneath a parked car. I had been seeing one in my neighbor’s yard, so it’s likely the same individual. 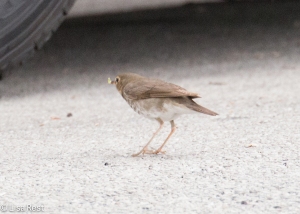 The flowers are all gone now from my Horse Chestnut but that day the bees were enjoying the bounty.

Now I’m looking forward to fall migration to see if I can repeat the experiment on those iffy mornings when I don’t necessarily feel like going “somewhere.” It’s certainly easier to take a stroll around the block, and I don’t have to worry about finding my way back to where I started. 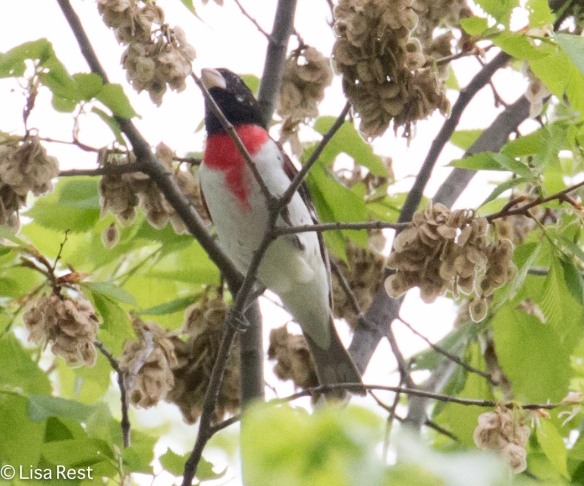 Spring migration is pretty much over, although late-comers and late-leavers are still surfacing here and there. Now my focus will turn to breeding birds and, whenever possible, finishing my review of photographs from trips I’ve already taken before I set off for somewhere else…

6 thoughts on “Birding the Hood”