We had beautiful weather for the entire trip, which made the drive from Puerto Vallarta to San Blas, Mexico, along the Pacific coast in the state of Nayarit, that much better. It’s a long drive, and we made several stops along the way to look for birds. Some were familiar, like Yellow Warbler, Nashville Warbler, and Summer Tanager which visit my habitat during spring and summer.

I don’t know where I saw this heron, but the camera doesn’t lie, so we must have encountered it on that day. I don’t see Yellow-Crowned Night-Herons very often, especially juveniles.

At some point it was temporarily cloudy along the way. So you may wonder why I am including these very dark pictures. The Cinnamon-Rumped Seedeater is of some significance in that it has been split from the White-Collared Seedeater, which makes it an endemic species. And such a close encounter with some Black Vultures seemed friendly enough.

One of many Grayish Saltators on the trip.

We would see Sinaloa Wrens again. Which didn’t stop us from searching for a species called “Happy Wren” which we heard quite often, but hardly saw it once.

This could have been our only Gila Woodpecker. I had thought it was already on my life list but it turns out I haven’t seen it before, except in a field guide, so I am glad I have proof.

We would see Rufous-bellied Chachalacas again, but for a large bird they are amazing difficult to capture.

Our first Citreoline Trogon. I was surprised to find I actually got a fairly decent picture.

Later in the day, we were on the beach, and this lone Willet gave us good, if distant, views as it expertly navigated the shore.

An assortment of beach bums were gathered – Brown Pelicans, Black Vultures, Magnificent Frigatebirds, various Herons – I think a man had left them some food.

We were assured all cormorants would be Neo-tropical…and most of the terns were Royal.

Before we checked into our hotel, we stopped at a historical site, El fuerte de la Contaduria, when we arrived in San Blas. It’s situated on a cliff overlooking the ocean. I wish I had paid more attention to the historic significance which our guide, Steve, was trying to impart to us, but I was pretty tired from traveling by then. I believe the statue is of Don Jose Maria Mercado.

One thing I do remember is Steve reading the Henry Wadsworth Longfellow poem, The Bells of San Blas.

A version of what happened at the fort is nicely summarized here.

I hope to make some progress over the weekend. I am fading into the sunset to process more pictures.

Espanola Island is a small island in the southernmost tip of the Galapagos Archipelago. As one of the oldest islands, it is estimated to be between two and three million years old, and was where we spent our last full day of the trip. In the morning, on the rocky, windswept Punta Suarez side of the island, we were greeted by nesting seabirds, and fortunate enough to see the courtship rituals of Waved Albatross and to some extent the Blue-Footed Boobies, although most of the latter’s nesting seemed to be over.

If you click on the pictures below you can see some of the “waved” pattern on the Waved Albatross’s breast. The bird in the second photo has a band with a number on it.

Below is one of several videos I took of the courtship behavior. It was impossible to capture any one entire interaction as they seemed to go on and on for a long time!

Some Blue-Footed Boobies were displaying but were too far away to capture on video. I suspect we were several weeks too late. 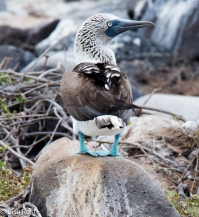 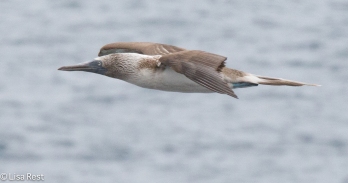 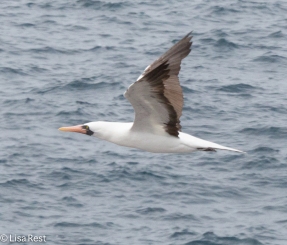 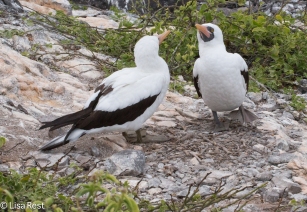 There was a Wandering Tattler in this tidal pool, along with a Sea Lion. 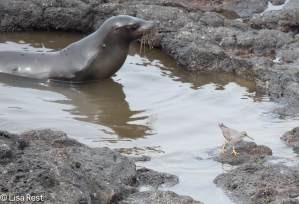 Beautiful Swallow-Tailed Gulls were present too. Below is a close-up of the red skin that forms a ring around the eye.

This was my last opportunity to try and capture a Red-Billed Tropicbird. 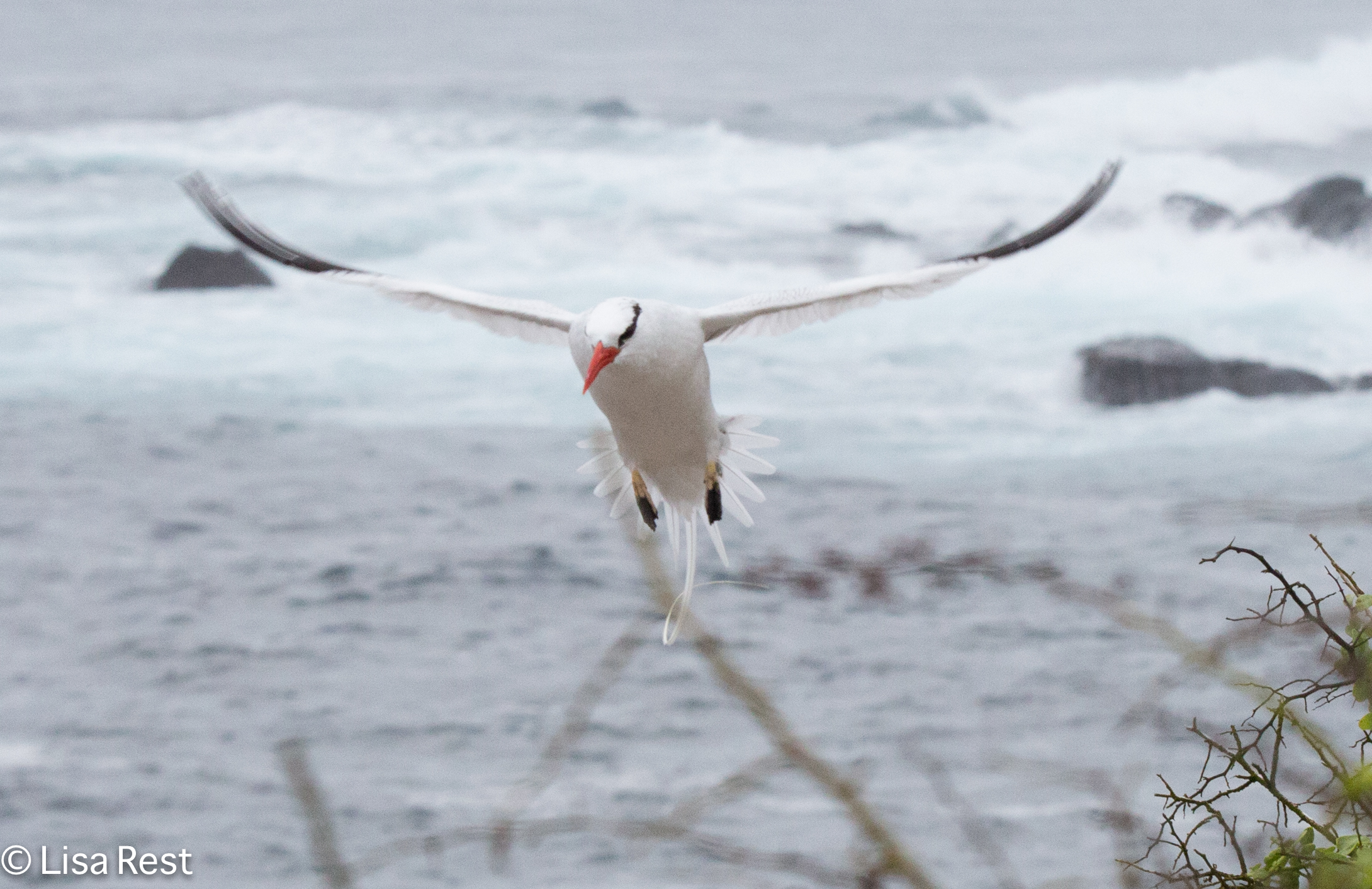 And the Galapagos Hawk made an appearance. 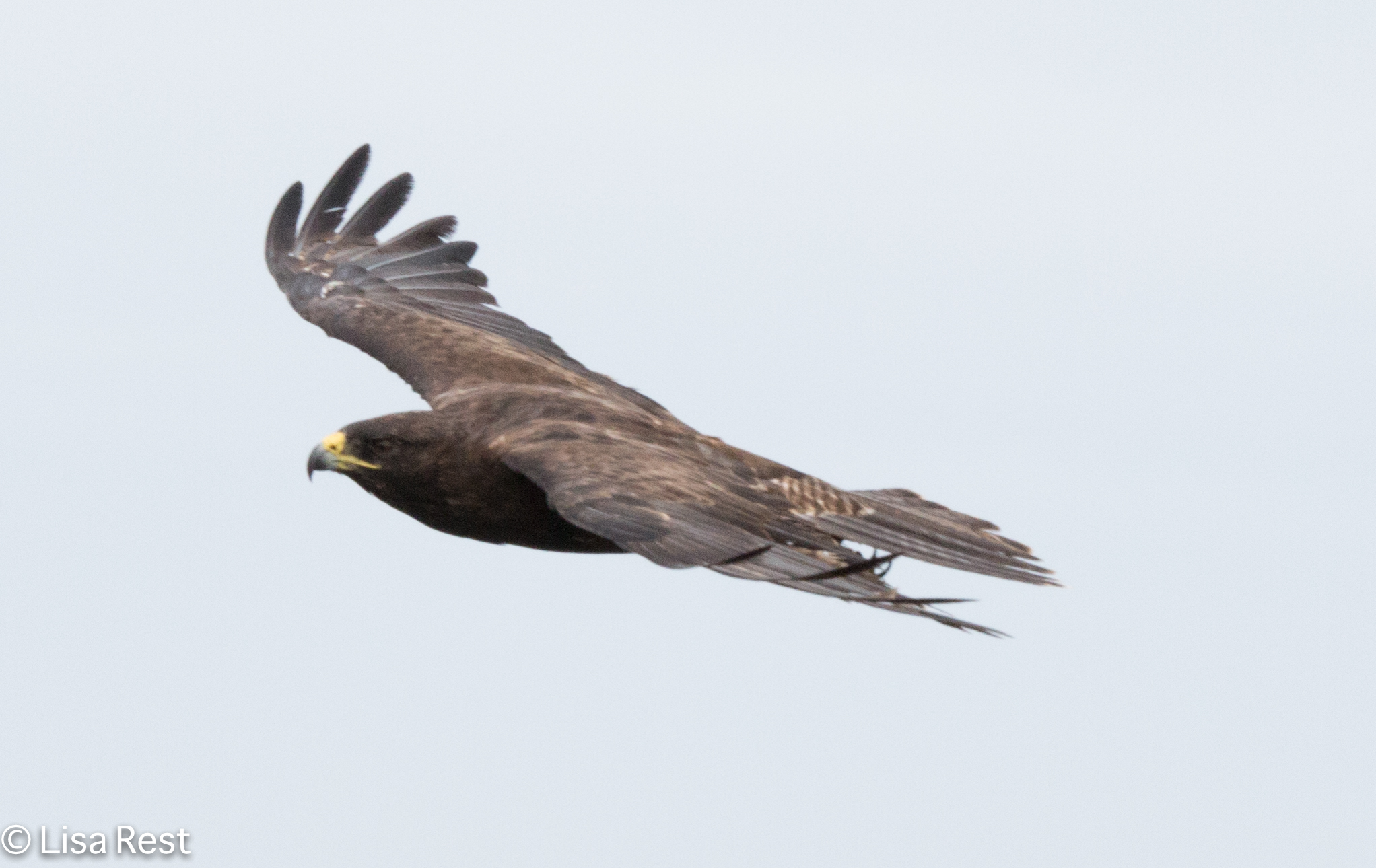 Espanola has its own species of lava lizard.

And the finch find of the day was the Large Cactus Finch.

Also present, the Marine Iguanas, a Hermit Crab and a Yellow-Crowned Night-Heron

In the afternoon we visited the other side of the island, Gardner Bay, which has a wide stretch of beach and a lot of Espanola Mockingbirds begging for water. It was hard to resist them but we were not allowed to give in to their demands. You can see and hear them begging from my roommate in the video below. 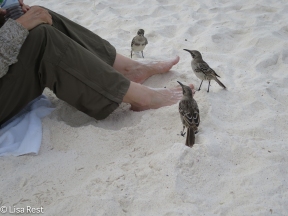 I love the blue accents on the rest of this bird.

Below, our last dinner sculpture and the final day’s plan to visit Santa Cruz Island in the morning before our flight back to the mainland. 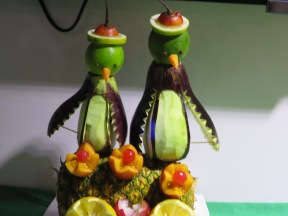 I am going to the Gull Frolic on Saturday and will likely report back from that with some photos. The forecast is for warmer temperatures than last year, but it is always windy and somewhat chilly on the lakefront near the Wisconsin border. I am thankful the forecast for rain has been postponed until Sunday.